The Difference Between Air Radon and Water Radon 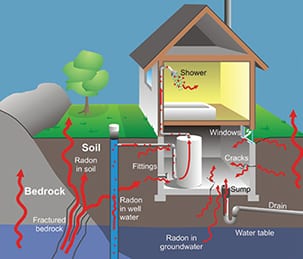 Radon is a toxic gas that can get into water and air in and around your home. While it is very dangerous, it is also undetectable without a test for the gas.

Although many people are aware of the dangers of radon in a home, it is still widely unknown whether it is more dangerous to have radon in water or in the air.

Radon in the Air

Radon gets into the air when the dirt contains uranium, and then as the uranium is broken down, radon is produced as a byproduct.

Typically, the soil that the uranium is in is under the home, meaning that when radon gas is produced, it cannot dissipate into the air. When there is a structure (a home) blocking the way between the soil and the air, the gas must find another way to escape, and it makes its way into the home.

Then, the gas gets trapped within the home and can cause serious health repercussions, including fatality.

Radon in the air is especially dangerous because it is undetectable without equipment. It is tasteless, odorless, invisible and lethal when trapped indoors.

Similar to the way that radon escapes into the air, it can get into water that flows over or through granite and uranium rock formations.

When the radon is released and cannot escape through the rock, it can dissolve in the water. When the water is then released, such as through a faucet or shower, the radon escapes from the water and into the air.

This then produces the same effects as when it is released into the air from the soil.

How Do I Know if My Home has Radon?

There is no way to know if your home has dangerous radon levels without getting the air and water tested. Since the gas in undetectable without the proper equipment, the gas can be at dangerous levels in your home for years without you even knowing.

The effects of radon can be quick or gradual, so you may not know that you have a radon problem until it is too late.

Don’t Worry, Radon Can be Fixed

While radon is an extremely dangerous gas, it is also very common. Almost every home either has, had, or will have radon in the water or air.

That being said, radon can be mitigated easily, through a well-system for water or air system for air levels.

If you are not sure if your home has radon, or if you have a mitigation system already, it is a good idea to get a radon air and water inspection from a professional inspector. This will ensure that your home is safe and you can live with peace of mind.

Let us “Reveal” your home’s story!

We welcome your reviews on Google, Facebook & Home Advisor

How to Get Your Home Winter Ready in the Northeast